The UKU has just released a document which outlines the procedures they can now go through to punish teams for being poorly spirited.

After a “triggering spirit score” (tournament spirit average below 8 / two averages below 9 / two scores at a tournament of 6 or below), the team is contacted with breakdowns of the scores, offered support/discussion, and reminded of the importance of SOTG. If the team receives another triggering spirit score, and the UKU do not consider that appropriate steps have been taken internally to improve their spirit, they may be sanctioned with any of the following:

Playing outside of the rules of spirit of the game is now a punishable offence – unlike any other rule. We have all been asked by beginners questions like “What happens if you mack your own pull further down the field?” – the answer being simply that you are not allowed to do it; there is no punishment. The teams work out for themselves the most fair way to resume the game. This aspect of SOTG is probably the most striking for new players – every aspect of the game does actually come down to the players. The UKU are breaking this striking aspect at the very highest level – there is now an answer to the ultimate SOTG question; “What happens if your team consistently cheats to win?”

Previously the answer would be something along the lines of “Well, the entire game would cease to work, and other teams will think you are complete dicks” – are we being too idealistic to think this is an adequate deterrent? Apparently not – it has been working just fine so far.

Since the UKU’s recent publication, the consequences for poor spirit are now defined, which opens the door to weighing those consequences against poorly spirited actions, much like a footballer weighs up a red card against stopping a goal with their hand.

Over the years, various teams have drifted through seasons of poor spirit, but their consciences have always held them accountable and have, sooner or later, spurred them on to address any spirit issues. Clapham had their troubles many years ago, but instigated rules such as ‘no contested calls / sending the disc back at training, either uphold or retract the call’ – and went on to not only win Spirit at European Clubs 2005, but also took home the gold medals. 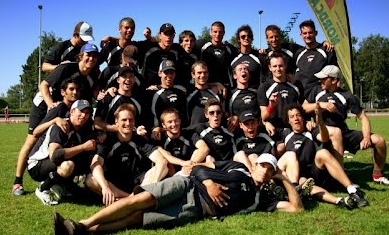 Uni teams have been through bad patches, but have always come out the other side – either from getting to know their opponents better and thus being more susceptible to peer pressure (or just not being jerks to their friends), or because no freshers want to stay with a team that it’s clear everyone dislikes, or more often, their conscience struggles when cheating to win a game when nobody is there stop you. Our consciences are no longer the only thing keeping us in check – the UKU’s document has now removed the need for a conscience to keep this game working.

Judging other teams spirit is also now mandatory, with repeated lapses punishable by £100 fines and results being revoked. When you’re writing that spirit score, you have real power to impact your opponents performance retrospectively, depending on the UKU. Is it too idealistic to think that a better system would be to encourage teams to share their spirit scores with each other after the game, and discuss there and then if there are any shortcomings or misunderstandings? Whatever score you give an opponent, you should be willing and able to justify it to their face, and when you receive a poor score, you should be eager to learn the reasons why so that you might rectify it for the very next game.

Spirit in the UK really was not so bad in the first place, there were no awfully spirited teams consistently and blatantly cheating to win games, and no National titles have ever been in dispute due to contentious calls, so why have the UKU taken this step of refereeing our spirit now? Are these the actions of a well-meaning committee who have no discernible purpose in times of peace?

Spirit is now mandatory, how far you can push it has been defined, and your conscience is not the ultimate safety net anymore. This cuts deep and has the potential to be the most detrimental thing ever seen for SOTG.